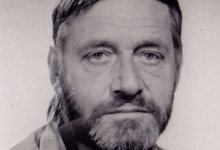 Denis Cannan was a precious lifelong friend. For many years we could find one another only through the telephone. His voice always carried the same alert humorous observation of life, even as he went tooting through the streets of Hove in his invalid chair, delighted by the reactions he could arouse. An endless reader, full of the classics, he was always sharp and ironic. Captain Carvallo burst on the London scene like a sparkling fountain in a grey desert of stagnant theatre. It was Laurence Oliver who launched him, and Denis and I collaborated on translations, adaptations and on the scenario of The Beggar’s Opera. But like his contemporary John Whiting, his urge to write was stifled by the lack of appreciation by much of the press for these new and unclassifiable voices. He was angry about everything but always with relish, delighting in his biting humour.

We shared many adventures in the comedy of life, visiting fortune tellers in Shepherd’s Bush and on Brighton Pier. We even went to one of Billy Graham’s first great evangelical meetings in Harringay Stadium, where Denis went all the way and signed up as a convert. When to his horror he was asked for his name, he panicked and thought about Graham Greene, whose book The Power and the Glory he was adapting for Paul Scofield in a season we were doing together at the Phoenix Theatre in Charing Cross Road. When Denis said he was called Graham, he became the star convert of the day.

To the end, all who had the joy to be near him could be vivified again and again by his special observations of the ways of the world and his loving warmth. Like his devoted wife Rosie and his children, I will never know another like him.

0 thoughts on “Peter Brook on the playwright Denis Cannan”